I am happy I pushed through. That's all I can say really, because I could have also DNF without feeling too bad about it.
Relocating interstate 5 weeks before the race with the stress of selling & buying a house at the same time, covid border restrictions, remote working, etc does not make the best training lead-up. Nevertheless I showed up and I own the result - all the good parts, the bad and the ugly! 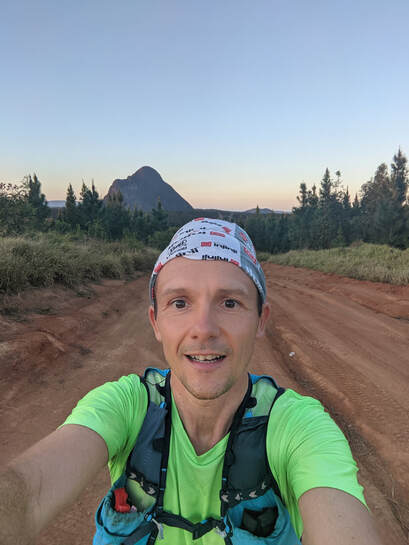 Glasshouse Mountain on red terrain
WHO NEEDS WATER?
This was the first race where my kids (7 & 5) were part of my support crew - together with Lidia of course.
I decided to run as light as possible, carrying minimum gear and use my handheld water bottle for all my liquids. And in the spirit of staying light and take the time at every checkpoint to chat to my crew, I decided not to even bother bringing it with me for the first 15km - smart eh!

I started off well in a small group of 5, chatting happily along the easy trail. It was warmer than I expected but not a big deal.
The group gradually reduced to 4, then 3 and then, about 25km in, it was just Rory and I. The trail was still easy and while it was getting warmer, all felt comfortable and I was in such a great company with Rory, a young slightly crazy runner, in his first ever 100km (which he ended up winning) as a warm up race to a half-ironman he was racing the next day, as a training for 30 marathons in 30 days he was going to run in November!

About 35km in, the running started to get harder through a section of hardcode 4WD tracks fully exposed to the hot sun. I have no idea how people can drive through that, the holes between the rocks and waterways (I'm sure there's a technical term for it) were huge! I struggled to keep the pace up and started to pay the price for my poor hydration strategy. I found myself running out of water 2-3km after the checkpoints and the running soon turned into walking and even sitting down in the shade to cool off. A punch in the face not even half-way into the race.

A couple of people ran pass and eventually I managed to latch on another runner who was struggling nearly as much as I was and we walked it to the next checkpoint at the 48km mark.
Lidia and the kids had just made it there after venturing all around the mountain to find the checkpoint. I must have looked great ... they sat me down on a chair, gave me two gallons of water to drink and covered my head and legs with a soaked towel. It took about 45 minutes to regain my senses and a bit of strength to venture out again. Good thing I wasn't in a rush!

We circled back to the same checkpoint twice for the next 20km and it was a relief both for me and for my support crew able to take a little rest before some more driving/adventure to get to all the other checkpoints.
I was 67km into the race, so technically I had only a third (+3km because the course is actually 103km) left to cover but something was telling me it would have felt way more.

And it did feel way longer than that. I continued on my own, getting lost a few times having to backtrack for 1-2 kms each time (the marking wasn't great, sorry have to say it) for what felt like forever.
I ran, walked, crawled through the 4WD tracks all around the mountain and back to the start/finish line with the head torch at full blast, just wanting to be over - well and truly cooked.

The result was a time of 13:36, feeling pretty tired and shitty to be totally honest.
IT'S NOT ALL BAD
While not a great result, that night I was pretty proud of myself. Proud I didn't give in, even if it meant walking a lot, getting lost a few times and feeling miserable along the way. After the rough year I had, just turning up and getting it done it's all the mind needed. tick!