On SBS Insight last year, I said I would love to test myself in the Badwater ultra-marathon.
The 24h race in Canberra was a hard reality check about running in the heat and on a hard surface for such a long time.
I wobble away with a new perspective and few lessons learnt... I still have a long way to go! ​

The CBR48h is an annual event held at the AIS (Australia Institute of Sport) athletic track in Canberra, where a bunch of lunatics (lunatics in the nicest possible way) test themselves over the marathon distance, 6 hours, 12 hours, 24 hours and 48 hours. Yes, 48 hours. Running around a 400 meters track!

Having never set foot on an athletic track in my life, I thought I get my money worth and entered the 24h race. This inexperience came at a great cost of course. As I write this, two weeks after the event, my quads are still in shock and my motivation to train is lacking.
​
Kudos to all who run on the weekend, and a huge thank you to my support crew superstar Joe "never miss a beat" Gallagher and Injinji Performance Product for their support.
​ 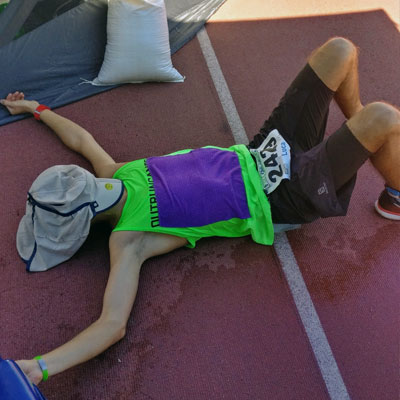 Crashing in the midday heat
SO DAMN HOT!
The race started at 9AM and for the first ten hours it was pretty damn hot! The temperature rose to 33 degrees where it stayed for most of the day, no breeze and no shade.

I started strong with the presumptuousness I could outrun and outsmart the heat. But just a few hours into the race, I was proven plain wrong. One minute I was ok and the next I felt anxiously too hot to keep going and I crashed.

By crashing I mean, with no warning I stopped at my gazebo, I lied on the ground with wet towels on my head, face, chest and wrists for several minutes to get hold of myself again.
If not for Joe, pouring buckets of ice cold water on my head and physically helping me get back up and back out on the track, I think in the state of confusion and physical exhaustion I was, I could have easily found excuses to just stay there.

I had four unplanned stops, and the afternoon became a battle for survival.
The heat affected everyone, and it was interesting to see everyone had their own way to cope with it: some stopped for a shower, others took relief in the shade, others walked it out.
For me, it was a case of running -> crashing -> picking myself up again -> repeat.

Joe kept me on top of hydration and nutrition but had to drive twice to the local store to buy 5kg ice bags and ice blocks! I was crunching on ice every other lap and I had 25 ice blocks! Sounds disgusting I know, my mouth was so dry! And of course, because the ice blocks contained a truckload of sugar, it actually made things worse… but they tasted so good!

The key point in my race, came around 6PM in the form of an unexpected visit by Martin Dent and his kids.
Seeing them gave me an incredible boost. Martin's presence and his kids shouting “GO LUCA LUCA LUCA YOU CAN DO IT” at every lap, got my running mojo back. I was HAPPY to be running. I started smiling, laughing with the kids, enjoy my self at every lap. My head and gaze lifted, I regained focus and confidence. My pace increased without effort, going from an unmotivated and ever so slightly deteriorating 6min/km to 5:20min/km. Magic. 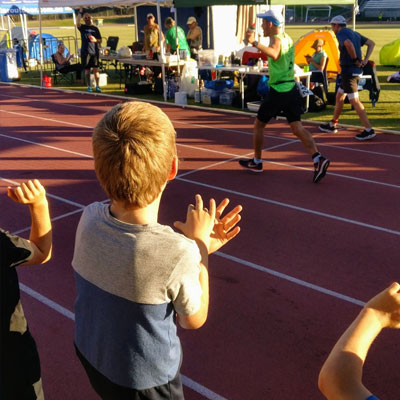 The best cheer squad in the world, thank you guys!
RACE START
I passed the 100km mark sometime after 7PM and that was the first time I looked at the leaderboard. Surprisingly, I was leading by about 6km on Stephen Redfern.
Stephen is a very strong and versatile ultra runner who had a fantastic 2017 season. He is as tough as nails so, with 14 hours to go, the margin was somewhat irrelevant. I later discovered he had cramping issues to deal with that day, this also explains why I had such a lead despite the several stops I took.

While the sun finally set and the temperature started to drop, my legs remained stuck to a slow pace.
It was my quads. They were in shock. Every time I stopped, I needed help to bend my legs, sit down, get up and get moving again. And the fact that I wanted to sit down, which I NEVER do, is a good indication that I was physically in pain.

At 10PM, I took the first of three planned power naps. They are not exactly naps, I don’t sleep, I just block out the noise, especially that of the constant tapping of feet, and give a chance to my mind to quiet down. For the most part, I believe ultra running is a mental challenge, and so far, this seems to be the most effective way I found to release mental stress.

Getting back out on the track was hard. It took a lot of will power to get up from the chair and start running.
Stephen, was clearly on a mission to catch me and that kept me focused and moving to match his pace.
We actually ran together for a while, taking turns at leading and pacing the other.
I think we were both trying to get in the other person mind and create doubts, without success as we were both relentless in not giving in. 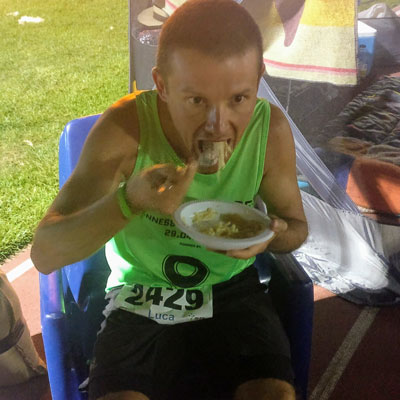 Determined to finish my bowl of cauliflower pasta
SPRINT FINISH​
The night was long and silent. My music player wasn’t working so my entertainment was to count laps and distance from Stephen. The great thing about running in circles on a 400 meter track is that you can keep an eye on everything and everyone and adapt your strategy accordingly. When Stephen stopped or walked, I made sure I pushed my pace a little to gain one or two loops, which I would then use minutes later for taking a break myself.

In the morning, the sun took time to rise. I was so impatient to get the first ray on my face, to warm me up and wake me up. I needed a second wind.

With 33 minutes to go, I worked out I needed 15 loops to make 220km, quite an hard task for the way I was feeling.
As always, in these situations you have the choice to go for it or pretend it doesn’t matter.
I noticed Joe looking at the leaderboard, and I knew he was making the same calculations. He said nothing, he didn't have to. I went for it.

As it turned out, our race had started a few minutes past 9AM the day before so, when I clocked 220km, we still had 5 minutes to go. So what do you do? You run harder!
At the 90 seconds countdown, I was at the first turn of the oval determined to complete one last loop before time’s up. So went full sprint mode and at my own surprise, the legs responded and I complete the loop and an extra 100 meter to reach a final distance of 221.184km! 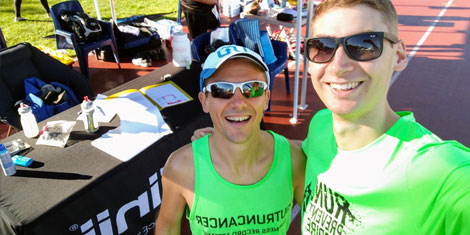 It was a long day for Joe too, he kept me moving, back and forth from the shops and from the kitchen, had two runs and chatted up a girl!
BE MY SUPPORT CREW AND GET A DATE!​
It was a hard day on the track and massive kudos to everyone who took part, whether it was 42km, 6 hours, 12 hours, 24 hours or the crazy 48 hours.

A huge thank you goes to my friend and wonderful support crew Joe.
He managed to keep me moving, fed, and mentally positive for the whole 24 hours. And when I was confused, I knew I could totally trust his judgement. No questions, just statements - the way I like it.
It was a hard day for him as much as it was for me, no sleep, under the elements, with a very demanding runner!
He says he enjoyed the experience - go figure! Maybe it wasn't much about the running but more the chatting up with the girls. He ended up with the phone number of a good looking female ultra runner spectator, so here you go... Being my support crew pays off! 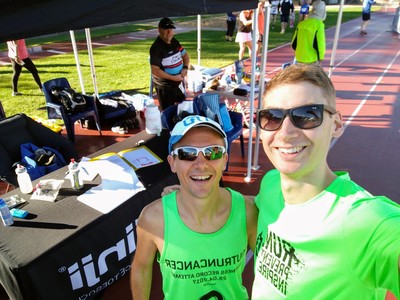 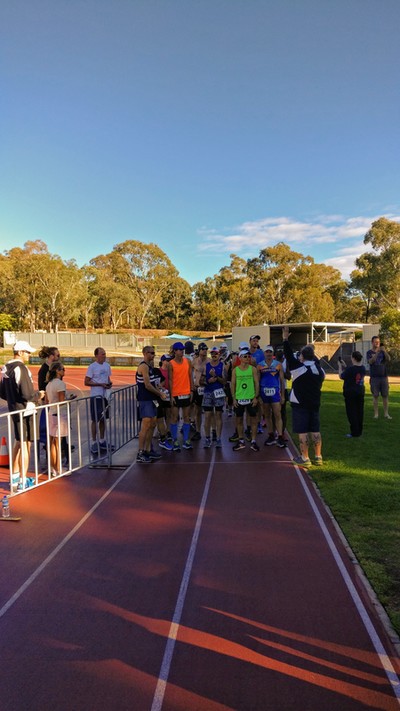 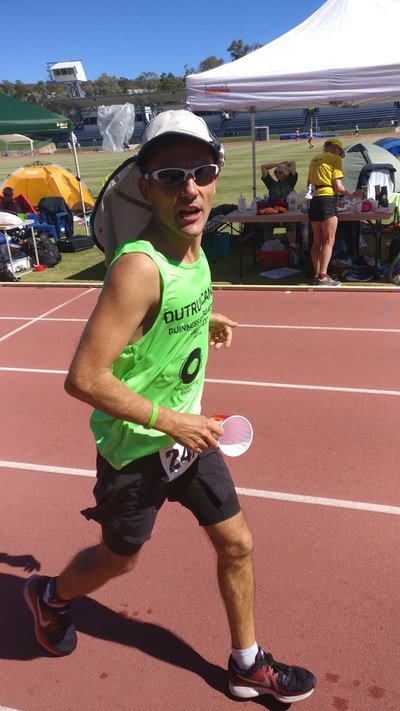 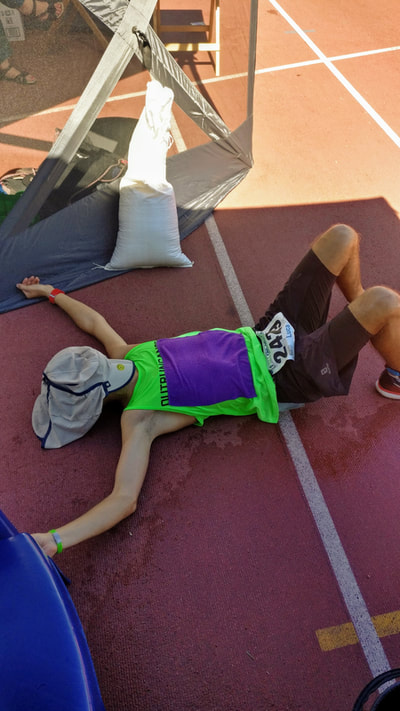 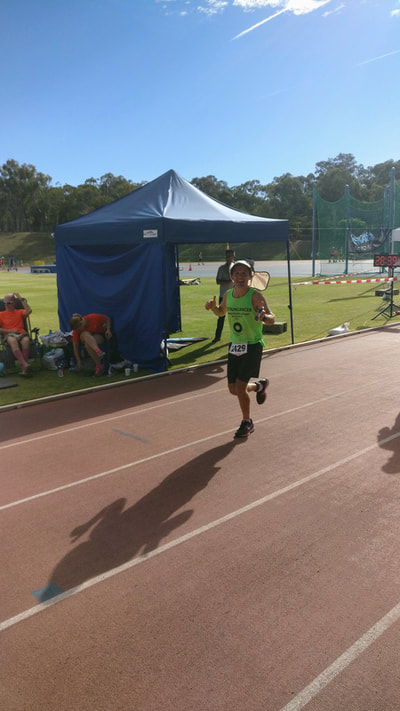 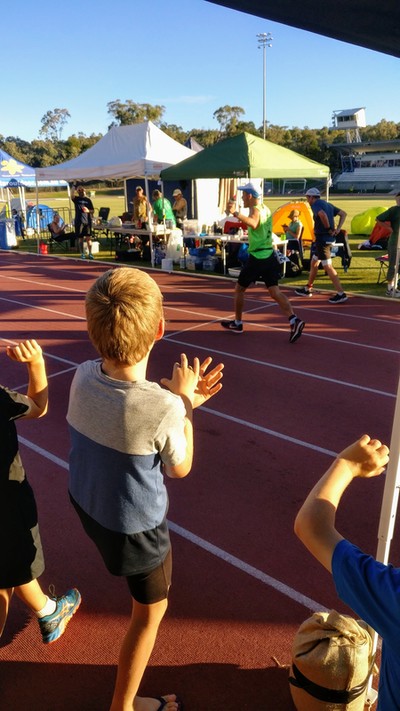 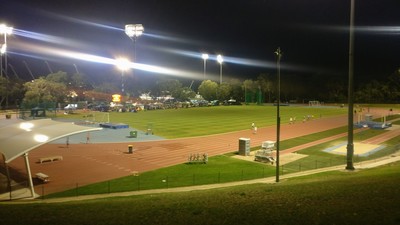 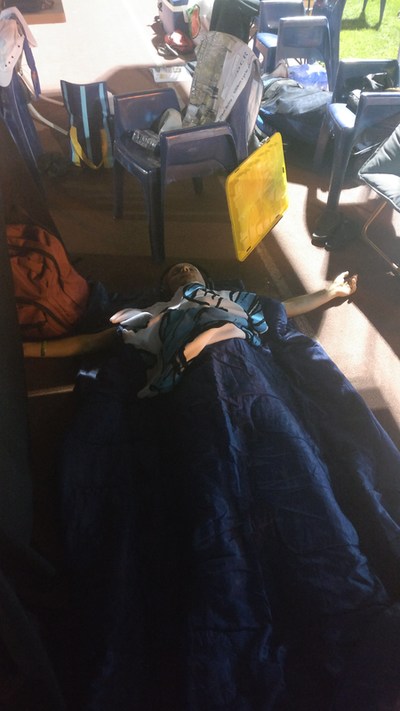 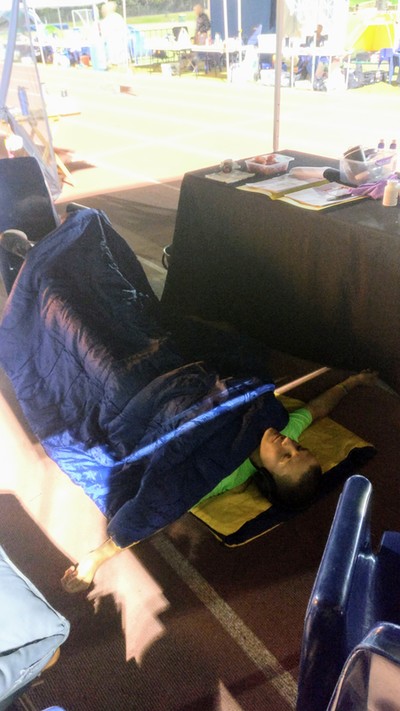 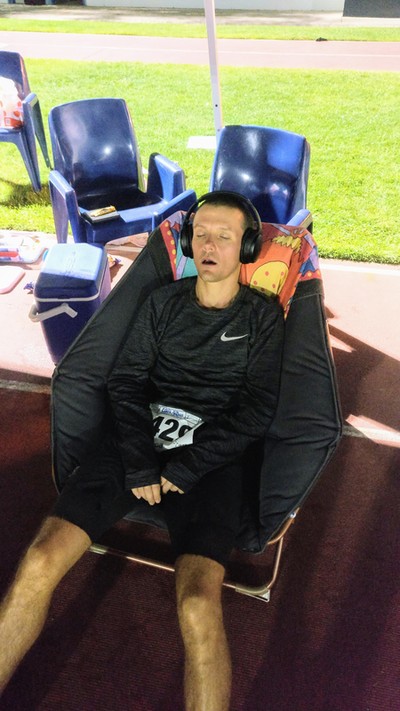 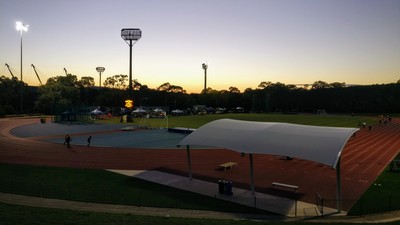 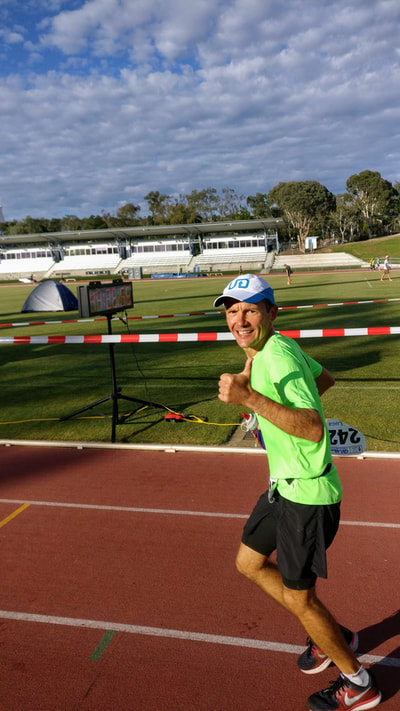 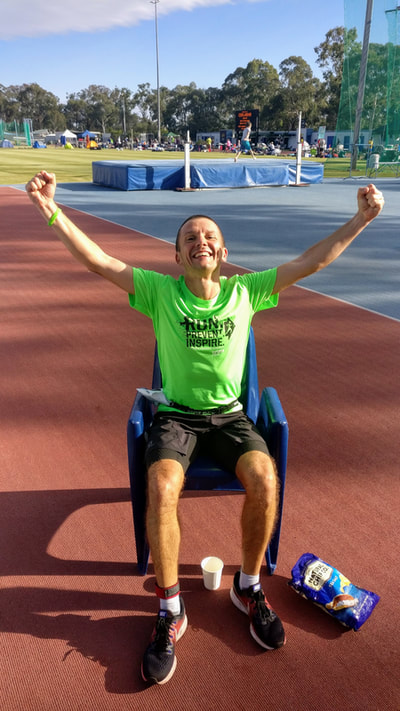 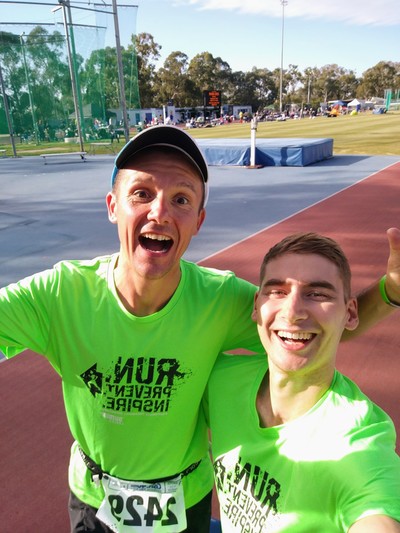 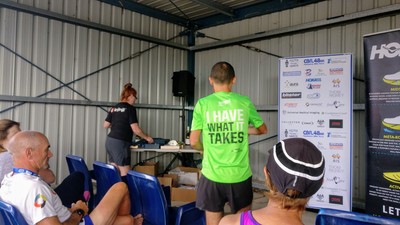 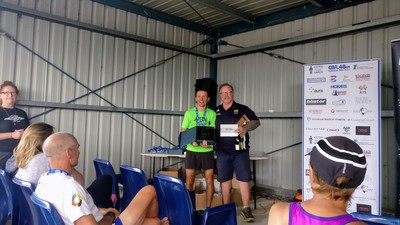