Finally!!! A race I can start from home!

I moved to Noosa end of July and early September I saw the advert for the Noosa Ultra Trail, starting and finishing 2km from home. I couldn't believe my eyes... an omen that I have chosen the right place to live!
I got in touch right away with the race director, Nick Stewart, as I wanted to get involved in a way or another.

Being the inaugural year, Nick had so much on his plate already. He shared he started organising the event (i.e. getting permits from 12 different bodies, logistics, etc) one year prior! By the day the event took place, Nick and his team tallied about 5000 hours of organising.
Now let's all pause and think about that next time we sign up for an ultra event, and recognise that often, these events are organised by individuals, small teams, small businesses. People and businesses vulnerable to physical and mental burn-outs, at risk of pandemics and to unfavourable weather conditions causing cancellations. Let's all be mindful of the hard work and passion behind the scene, and being too harsh on judging events logistics, registration costs, or running out of your favourite jelly beans at the checkpoint!

Having said all of that... the man delivered! It was a fantastic event and a massive achievement by Nick and his team, delivering a weekend of running and lifestyle activities. And not just one race, the team delivered a 15km, 25km, 30km, 50km, 80km and 100km on the same day!
​My hat off. Sincerely. 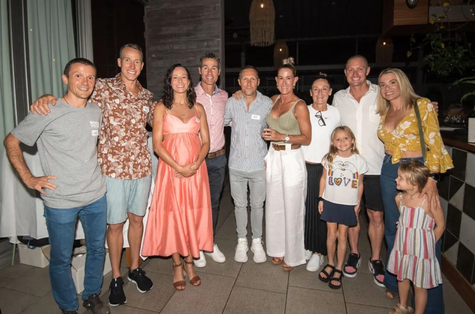 Hanging out with legends
DON'T GET BOGGED DOWN BY EXPECTATIONS
It is always easier said than done, but it is always worth a try.

The lead up to the Noosa Ultra Trail has been very bumpy: work commitments, shit weather and family affairs didn't leave me much time to train. My volume has been 60% less than what I would normally consider a good amount for a 100km race so I put all my bets into quality sessions and positive mindset.

And what if I threw all of that away and ran just accordingly to how the body feels on the day and be in peace with that? At the same time I was processing the last thought, my friend and runner I used to coach Colin texted out of the blue: "All the best tomorrow, Have fun and keep smiling, the running will look after itself".
Right, that's the race plan then! Talking about the student becoming the master!

On race day, I jogged from home to the start line and it felt so good to be able to do that. No need to wake up the family, or get a lift, just put your shoes on and go out like any other morning.. minus the 100km ahead of course. Can't fit that before work! :D
I made to the start line with 10 minutes to spare, in time to meet some old ultra friends (John, Simone, Anthony, Sean) from all around Australia and meeting and two new friends and phenomenal athletes I have the privilege to coach, Mat and Roxy... more about them later!

I managed to contain my excitement in the first 10km of the race on the trail I know like the back of my hand and I settled into a comfortable pace in a gap between runners.
At the out-&-back section at km 23km, I found myself fighting the 200m ascent/descent way more than I thought I would at such an early stage. The temperature was starting to rise and I was drinking like there was no tomorrow, running out of water twice even if I carried 1 litre of water in my overly full and heavy running pack.

LET'S TALK ABOUT PACKS AND FOOD
I am usually well organised with my race pack, nutrition and hydration strategy to limit the amount of extra weight I carry and ensure I bring only what I am actually going to consume. A week ahead of the race, I have a plan on paper and line up all my gear somewhere in plain sight, so I can pass by daily and "feel" if there is something missing or not quite right.
Not this time. I packed my bag the evening before and loaded it with so much extra nutrition and gear I knew very well I was never going to use. After a few busy days I was simply too tired and couldn't be bothered to take the time to think. So I ended up with a pretty heavy backpack, so much so, it bruised my hips. All I consumed could have fit in a running belt.

LET'S CARRY ON RUNNING
The climb from 50km to 54km was unpleasant to say the least. Approaching midday, I walked the whole way up, overheating and struggling to keep momentum. The thought that kept popping up in my mind was "Why do you never train walking hills? It's great to run hills when you are fresh or they are not so steep, how useful is that now?"

As I reached the top of the climb, a heard a familiar voice right behind me. It was Roxy! Positive and full of energy, she looked much happier than me! We ran together and chatted for the following 10 km and while she was saying she hoped to keep up with me, it was pretty clear to me it was the other way around! I was fading, legs feeling like dead wood already!
And at checkpoint 64km, while I fiddled with my backpack she was gone not to be seen again. She finished in 10:45, placing first female in her first ever 100km! She is super talented and ... she must have a good coach! :)

While the last 36km were runnable, it was still pretty hot and I was doubtful I could keep up the pace. I kept moving forward and drinking lots, getting onto caffeine hoping for a second wind. With 15km to go, I saw a window of opportunity to sneak under 11 hours and went for it.
My dreams came down crashing in the last familiar switch back section, the watched showed 95km in 10:35 but I knew for a fact the distance to the finish was closer to 7km. So I abandoned the chase for 11h and "enjoyed" the last stretch. In all honesty, I don't think I had the legs for it anyway!

Final result 11:12:15, and very very very very happy.
My sister, Lidia and the kids, my good friends Mark and Jude from Sydney (who smashed the 50km and 15km respectively) were at the finish line, cheering me on. It felt a lot like being back to my first "North Face 100" in 2012... and this is exciting, from those "humble" beginning, the NF became UTA which now sells out in matter of hours and attracts thousands (maybe ~10000?) people to the area.
I have no doubt that the Noosa Ultra Trail will see the same hyperbolic growth. The area is beautiful, the trails are excellent, the RD is passionate... all the right ingredients are there

ICE BATHS
In the last few months I have been experimenting with ice baths and breath work.
I had one an hour after the race and ... WOW! I ended up staying in for 30 minutes in it until the last bit of ice melted. As a result, that night I slept pretty well instead of wiggling constantly like I would normally do!
​
Now I'm building one in my office!