If it's in strava it didn't happen.. so here is the proof!
42.2 km on soft sand.. starting at 4pm on the shortest day of the year. Most of the run with head torches. One km loops.
I think this qualifies to be part of the memorable runs section!

I registered for the inaugural Pat Farmer’s Quicksand marathon, a few days after my 24 hours treadmill marathon, thinking that : “Well, this can’t be that bad.. it’s only a marathon”.
I couldn’t have been more wrong. I should have gone for a soft sand run before signing up. Or maybe it’s a good thing I didn’t..

The event organised by Pat Farmer and Keith Hong, was held in Maroubra Beach. 100-120 runners in total between the 3 distances of 10km, 21km and 42.2km. 25 marathon runners.
Despite the heavy rain and cold temperatures of the days leading up to the event, race day conditions were perfect. Very little wind and sunshine; Pat and Keith must have connections with the Gods to arrange that.

With only a couple of short training runs on the sand, I set myself a loose target time of 4:10 or 4:20 for the marathon. I must admit I was pretty nervous at the start, not really knowing what I was in for.
When the gun went off, we all took off… fast. I wanted to stay close to the lead but really – was this the pace these guys planned to maintain for 42km? I hoped no.
The first few laps were all about figuring out the best technique, both in terms of running stride and route. I had looked up online and asked few friends about sand running technique and I was trying to put that in practice. The general idea being to lift the knees high, shorten the stride and push off other people’s tracks. Easily said than done; it was taking a great deal of effort in just focusing on not falling back into my normal running stride. If the running technique was correct, everything else felt off.
In terms of route, Two of the front runners were deviating from the loop’s shortest possible trajectory, going all the way down the beach where the water breaks and the sand is harder. That meant stretching the run, maybe 30meters per loop. Was it worth it? I gave myself a few laps to work out my strategy while following the shortest and harder soft sand route.

Seven or eight laps in, my legs were heavy and I was falling back from the leaders at every loop, they were already 4-500 meters ahead of me. That was pretty discouraging as I felt I was running at a good pace and putting in a reasonable effort.
On my 9th loop, with calves and feet aching, I decided to take the wider loop at the water edge to test the new trajectory.
​
Running on the hard sand was awesome. I could stretch my legs and run normally for a good 3-400 meters, picking up the pace considerably, gaining 10-20 seconds a loop. Totally worth the extra distance.
​
Meanwhile, my confidence about soft sand running also improved. I was now able to run a bit more freely and relaxed. And I started to gain some positions to reach second position at Km 18.
Few people started to crash after the crazy start.
The leader, Rey from Sydney Striders, was 3/4 of a lap in front of me with no sign of slowing down. 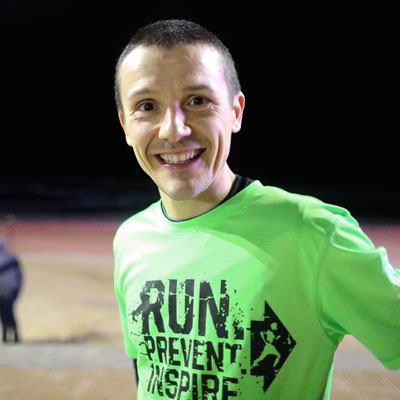 All smiles AFTER the race
As I was getting closer to the half marathon mark I wondered if I had signed up for the wrong event. Fatigue was starting to build up and my pace was all over the shop. “Maybe I should have done the half” I thought. No way back now, head torch on and keep pushing.
​
Ray, the leader, lapped me on the 22nd lap but that didn’t really bothered me. I had other stuff to worry about… keep moving and get some energy in me.
Around 27km I got a second wind and started to feel better, getting progressively faster and faster. So much so that I managed to catch up with Ray at my km 32 (he was still one km ahead of me) after a 5:20 lap. I overtook him on the hard sand and for a little while I thought I may have a chance to gain some ground. Afterwards Ray admitted I gave him a scare. He was going through a tough patch, running slow and feeling like he couldn’t go any faster. When I overtook him, he said to himself “actually, I can go faster”. Winner’s mindset. He caught up with me in less than a loop and slowly disappeared in the distance. I didn’t see him till the end.

I remember saying it was one of the hardest run I had done
Reaching the single digit countdown was a relief, I lapped the person in 3rd position, and now I could relax a little.
Running on the beach at night with head torches was great. It gives you a feeling of freedom I had not experienced before. It was pitch dark and predicting how far the waves would crash was fun.

While some people ran barefoot I went for shoes. I think running barefoot would have given me enormous blisters but I would have probably kept my toenails. When I took off my shoes after the run I discovered two black toenails, most likely due to sand accumulating in the shoes.

The sense of camaraderie between runners was exceptional. We all encouraged each other to keep pushing on, maintaining the smile despite the constant “this is hard!” comment. I don’t think anyone was fully prepared for 42.2km on the sand to be so… “interesting”.
Pat joined the fun doing laps with the runners to encourage us. When someone like Pat tells you to push on, that despite the pain you can do it, you stop doubting yourself. At every lap, the MC would tell your name on the loudspeaker, your laps and your lap pace.
Ray completed in an amazing 3:58, one and a half lap ahead of me. I don’t know him but I was genuinely happy he cracked the 4 hours mark. What a fantastic effort.
In my mind I thought the last lap would be easy, that I could sprint to do my PB. But I was wrong, it was as hard as the previous 42! Sand running is unforgiving. So despite seeing the finish line, I didn’t get the buzz of energy I normally get. I still “sprinted” for the last 200 meters but I must have looked funny in the attempt!

​After catching my breath and realising I completed the challenge.. The smile is back!
So, the moral of the story is “Sign up for events when you are on a high! You will realise what you have committed to only a bit later, but hey! Somehow it will turn out to be fun!”
Want to have a laugh? Look at my Strava stats