Running in circles or stationary seems to be my thing lately.
For how strange this may sound, I actually do like these types of challenges as in my opinion it adds a dimension to running.
For me it simplifies the whole process as, let’s admit it, my navigation skills are poor; hence running in loops removes any worry of taking wrong turns. I can put all that mental stress/focus and energy at a better use, staying in the moment and maintaining a good form and pace.
The “boredom” of the same scenery that some runners find hard, it’s not a problem for me. To a certain degree, it is a good distraction from the outside noise. Like most, I have a busy life and lack mental downtime. In any given day I have so many untied thoughts and feelings to catch up with, so much internal conversations going on, that when I finally let my mind lose it often takes me hours to flush out.
The mental aspect of running is what got me started exploring longer distances when I lost my mother to cancer and I was trying to make sense of it.

So the combination of running in loops, the beautiful course, the great event organisation, the easy access and the great experience I had in 2015 made the Centennial Park Ultra the perfect opportunity for my first attempt to run 100km under 8hours. Why 100km in under 8hours? This gives you an automatic qualifier to the mighty Spartathlon – a race in my wishlist.
​
The Centennial Park Ultra is an iconic 100km ultramarathon around the 3.56km white fence of the Centennial Parklands in Sydney. 28 (and a bit) loops on hard grass and path, mostly flat with a slight incline which every loop I swear get steeper and steeper. 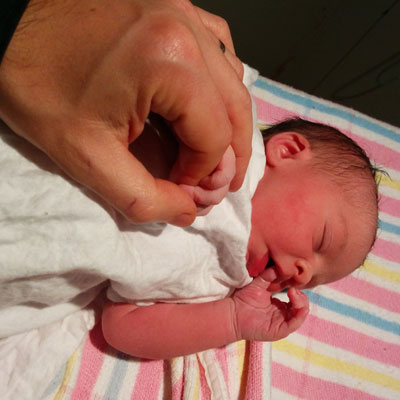 My little, beautiful angel
This year I peaked well in advance of the race; literally 2 months before! With Lidia’s due date beginning of July, any long training run needed to happen in June and July was going to be a light month. If we take the race result as best measure to this training approach, then less training, shorter long runs, more “rest” and less sleep(!) work wonders!

What I lacked in physical training, I compensated with mental training. I planned and visualised the race for weeks, I broken it down to one hour sections until I knew by heart the required splits to reach my goal. This freed me from constantly worrying about pace on race day. I only needed to stick to my hourly plan and not get carried away by excitement. The plan was to build a 2km (10 minutes) lead at half way as I expected to slow down considerably in the second part conscious that general fatigue and limited volume on my legs would hurt. In 2015 I struggled big time in the last 30km. 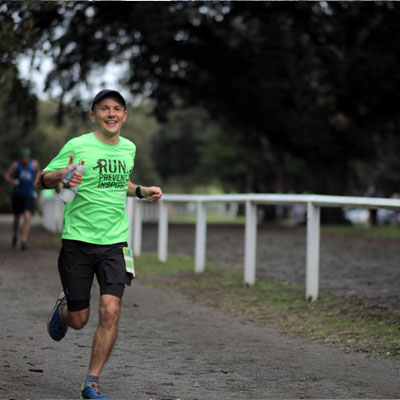 All smiles at the start!
Before the race, I exchanged few words with mighty Martin Frier who was using the CP ultra as a training run for the Spartathlon. Like me, he entered in January and his name didn’t get picked in the lottery. He received the offer to participate only in July after few people pulled out. Now it was all hands on deck to get ready for this epic run in just few weeks!

When the gun went off, I started at a good pace and found myself running alongside another runner, Todd, chatting about life, children, running. He had a goal of running 9 hours so I was quite shocked we were running together. Did I get my math wrong? Or was he pushing too hard? Instead of panicking and push harder, I decided to trust my plan and check in after the first hour. All was good and by the time we got to 25km, Todd waved goodbye and slowed down.

From there I carried on on my own. That didn’t mean I was alone though. There were plenty of runners from the CP 50km and relays as well as the usual Sunday runners on the paved path or running on the trail in the opposite direction. So I constantly waved at friends and chatted.

I reached the marathon mark in 3h:10 and felt pretty good, taking in 1 gel every hour and 1x600ml bottle of tailwind every 3 loops. By then I realised I was in the lead and by the look of things no-one on my tail. 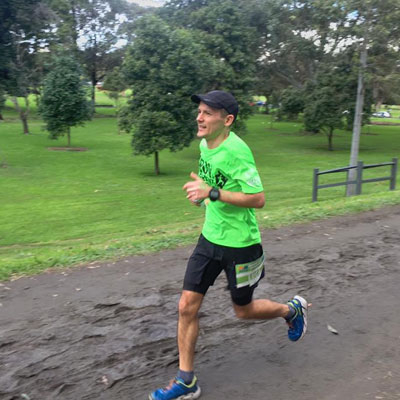 The pain locker starts at km 75
​Hour 4, 5 and 6 also passed comfortably; I was slowing down ever so slightly – 200 meters x hour which is not too bad – happy days.

From km 75, the lack of training showed the effects. All of the sudden, my stride shortened. I couldn’t fully extend the leg and kick. The legs felt locked in at the hips and the hips flexors felt tight. I slowed down 15 seconds per km to run just around 5min/km.
I was expecting to slow down but more gradually!
Last year, here is when all fell apart and I lost focus and started to cramp up. I was determined not to allow that to happen again. I battled against my inner daemons to remain positive and confident that if I could keep the new pace for the next hour, I would still be on target for a sub 8.. just.

Hitting 90km at the 7hours mark was a relief and a clear warning – to keep 5 mins/km! Meanwhile my best support team also made it to the park to see me finish. Lidia, Lorenzo, Allegra, Lidia’s mum were there and that gave me the last buzz I needed. Especially exchanging a hi-five with Lorenzo every lap. Gav and Brad joined too and I felt very honoured they took time off from their Sunday to come and cheer for me.
Brad wanted to run the last loops with me and I abruptly said no, worried someone would say I had a pacer. I feel stupid now as I don’t think anyone would have said anything, it was just my tiredness talking nonsense. 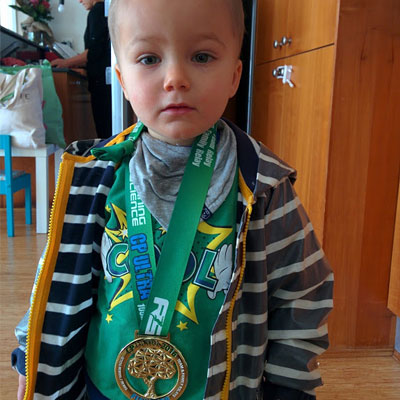 Proud of his medal
​ The last 3 laps weren’t pleasant but not as bad as the previous year. I shouted out my rage and pain only once this time! J And I would have gotten away without anyone noticing if around the bend my friend Peter wasn’t standing there and laughing! He caught me again!
I don’t believe in holding in emotions, for me it only add mental stress.
So if I consciously or unconsciously I feel to shout, swear or cry to get me running again, I won’t hold it!

In the last hour I lost all my good intention and I was checking my watch every 1km split. When I finally got to the last lap with over 20 minutes to complete it, I knew I would make it and I started to smile again.

I walked the last 10 meters with my son Lorenzo, and this was worth the whole 8 hours of running.
We ran together across the finish line and he got the medal.
He was confused, excited and proud for his medal that he didn’t take off for days, literally.